I love fiction set in the Victorian era. Sexually-repressive mores and cool, arrogant superiority aside, the Victorians embody a sense of order and etiquette that often escapes us these days. They had protocols for social interaction—protocols embedded in unfortunate distinctions between classes, and laden with the constant threat of small talk about the weather, but protocols nonetheless. The Victorian cadence and diction are so courteous, delightful without being overly flowery. While I would never want to live in the Victorian era, I do admire them for this polished and civil approach to discourse.

So I was pleased to see Neal Stephenson invoke the Victorian zeitgeist in The Diamond Age, where the New Atlantans represent a vision of social order based on principle rather than authoritarian enforcement. Unlike the British Empire of old, the New Atlantans are but one phyle—albeit, one of the most influential—among many; those born into it are free to leave, and those not may, if accepted, take an Oath to Her Majesty Queen Victoria II and join. With such flexible notions of statehood and allegiance, Stephenson has created a middle ground between the localized countries of today and the decentralized megacorporation-states envisioned in some cyberpunk.

Through a neo-Victorian and Confucian lens, Stephenson depicts a variegated world where nanotechnology, coupled with nearly-unlimited energy, means an effective post-scarcity world—but there is still poverty, unrest, and injustice. On one level, this world seems utterly different from ours, with its own jargon, social strata, technology (of course), and conflicts. On another level, it seems remarkably similar to our world, the only difference being that post-scarcity has enabled every ideology to experiment with its own lifestyle (embodied by the phyles) without much fear of catastrophe.

Of course, this is just background. After a certain amount of fussing around with minor characters and establishing some expository details, Stephenson starts telling us a story about people whom we can care about, even when their individual needs conflict. Thus, while it is a tragedy that John Hackworth's illicit second copy of the Young Lady's Illustrated Primer gets stolen before he can give it to his daughter, it is a miracle for its new owner, Nell. As much as we want John to succeed in his goal of raising Fiona to achieve greatness, we also want Nell to grow up into a strong, capable girl who can escape her abusive domestic situation.

Through delightful stories-within-the-story and liberal use of jumps across the space of several years, Stephenson shows us Nell maturing, thanks to a loving older brother and the guiding hand of the Primer. One notable aspect of The Diamond Age was its ability to surprise me: Harv was one of many characters I didn't think I would like but did. He truly cared for Nell, to the point that when he helped her into a better situation but recognized he could not join her there, he essentially threw himself back into the slums so she could stay. Despite lacking any Primer to raise him, Harv turns out a good person, even if his ultimate fate is regrettable.

The character that surprised me most, however, was Miranda. She began as a ractor with a dream of stardom and ended up acting as a surrogate mother, through the Primer, for Nell. Her attachment to Nell, like that of Harv's is endearing in its genuineness. While Nell has a good many people interested in her wellbeing—indeed, a superfluity considering how impersonal and dangerous a world Stephenson makes this seem—Miranda, Harv, and Constable Moore stand out because they care about her as a person rather than a means to an end. To Lord Finkle-McGraw, John Hackworth, Judge Fang, etc., she is just an interesting experiment. To Miranda, she is a little girl (who grows up into a young woman) who needs a mother. Amid so much technology, the characters with personal stakes are the ones who matter most.

Unlike Miranda and Nell, not every character is so well-conceived. Some, like Judge Fang, start off important and then just vanish prior to the end of the book. Others, like Carl Hollywood, begin as minor characters only to vault to centre stage during the climax. Carl vexed me: at first he is just a paternal figure for Miranda, someone who gave her advice about her role as Nell's surrogate mother. Then, suddenly, he is a super-hacker who has a role in orchestrating the resolution behind the scenes. The plot similarly starts spectacularly and degenerates into a somewhat random collection of related conflicts, none of which receive a satisfactory resolution by the time the book abruptly ends. Much as he does in Snow Crash, Stephenson elects to provide no epilogue for his characters' lives, leaving us to wonder who flourishes and who perishes. Although I don't demand that a book tie up every loose end, I feel cheated when I invest myself in a character only for his or her story to stop when it feels like the conflict is barely concluded.

The Diamond Age exemplifies both the positive and negative hallmarks of Stephenson's style. His enthusiasm for technology is evident. His descriptions of that technology, as well as cities and characters, are both full of wonder and witticism. Stephenson enjoys drawing attention to contradictions, contrasting characters' overt reactions with what they really think about a situation, and the result is usually entertaining. And while The Diamond Age, like Snow Crash, depicts humanity as an organism at the society level, it does not entirely feel like a Stephenson book until much later in the story, when Hackworth introduces the concept of the Seed.

Ah, there's Stephenson's theme of information as a viral construct that is capable of reprogramming human society. A precursor appears in Nell's Primer, when she arrives in the domain of King Coyote and begins learning about Turing machines that function on a macroscopic level. To Hackworth, the Seed is a new technology, threatening because of the capabilities it grants to its possessor. To Dr. X, the Seed is a paradigm for social order, a blueprint. To both, it means the end of interdependence of the phyles: splinters will no longer rely on the main Feeds or their Sources controlled by the neo-Victorians. In this respect, while I don't think it quite compensates for the disappointing climax, the thematic aspects of The Diamond Age become most interesting just as one's interest in the plot diminishes.

There is a CBC radio show, Spark, that discusses the impact of new technology on our daily lives (I listen to it as a podcast, of course!). Rather than a discussion about technology, Spark is aimed at a general audience and focuses on the social implications of technology. The Diamond Age reminds me of Spark, because it too is a long look at how technology (like nanotechnology) affects society. It is a serious meditation on what might happen to society as the Internet continues to evolve, as our ability to manipulate nature extends to the atomic scale, and as our desire to find solutions to waste and environmental problems increases in urgency.

Of all his recurring motifs, Stephenson's treatment of humanity as a single organism is the one that intrigues me the most. This is not a new concept within science fiction—Isaac Asimov's civilization-manipulating Foundation series or Herbert's Golden Path spring to mind—but with the rise of memes and memetics, Stephenson's ideas seem timely. Snow Crash explored the idea that information could be transmitted virally, actually compromising a society like a disease compromises an immune system. The Diamond Age focuses more on morality, asking what exactly makes one culture differ from another, and how ideologies are transmitted cross-culturally. Can one hack a society, even one that is not a Turing machine?

Although it is tempting to simplify the conflict as one of Eastern-Western philosophies, it is possible to envision two different sides. Rather than East/West, we have two schools of thought about the propagation of culture to the next generation—a timeless problem. How do you ensure children see that your way of living is the best, even though it has obvious flaws? On one side, you have people like Judge Fang and Dr. X, who see it as the duty of the entire society to ensure that people are brought up to respect the social order and contribute in a useful manner. On the other side, there those like Lord Finkle-McGraw, who grasp that there is no reliable way to educate children and simultaneously ensure their loyalty: either you end up indoctrinating them, or they push away from you and rebel. Thus the desire for an alternative, Finkle-McGraw's elusive search for a systematic subversiveness.

The Diamond Age frustrated me and fascinated me. While I don't entirely agree with Stephenson's ideas, they are intriguing. Yet often, especially because of the lack of a satisfactory conclusion, the story seems to be nothing but a thin vehicle for the transmission of those ideas—it is all substance, heavy on theme and light on the plot. Stephenson may have piqued my interest, but he has to work harder than this if he hopes to hack my mind. 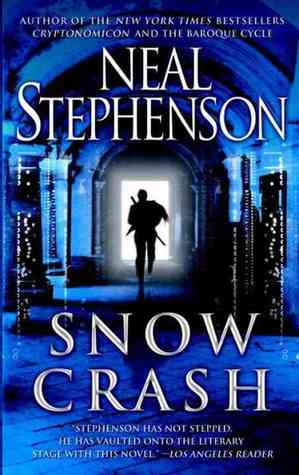