THE PHYSICS OF SUPERHEROES by James Kakalios ★★★★ | Kara.Reviews
Start End

I must confess that, as a kid and an adolescent, I never shared the ardour for comic books many of my peers did. I collected Archie comics and read the odd Superman comic, but that was about it. So unlike most, who come for the superheroes, I came to The Physics of Superheroes for the physics.

As an aspiring teacher, I love to hear about new ways of teaching difficult or boring topics to students. While I don't find physics boring, I can see it being difficult—and, depending on how it's presented, perhaps dull. There's no chance of that happening when the likes of Superman, Iron Man, and the Flash are involved. Even those like me, who aren't diehard comic book fans, will enjoy this innovative approach to freshman physics. I admit I was surprised to see Professor Kakalios derive examples from comic books for every major topic. From a pedagogical perspective, The Physics of Superheroes deserves high praise.

Because I am impatient, I powered through this book in three days. I do not recommend you do the same. This is, after all, a physics book—cunningly disguised as a discussion of superheroics, but a physics book nonetheless. There is a reason that freshman physics courses take up the entire school year: the brain is just not meant to absorb so much so fast. My math and physics background allowed me to keep afloat, but I can see many people buying this book for its attractive premise but then panning it for getting too difficult.

For the first few sections, Kakalios has no problem. Newtonian mechanics might be daunting at first, but its deterministic nature makes it reassuring: if you put the same variables in, you'll also get the same result. It's the probabilistic, indeterministic nature of quantum mechanics that leaves some people uncomfortable. If you have trouble visualizing an electron as matter wavefunction in a "probability cloud" about the atomic nucleus instead of the simpler "solar system" model we learn in high school, don't feel bad. Many of physics' most brilliant minds objected to quantum mechanics on similar grounds when it was in its infancy.

Modern physics is quite complex, and that's reflected in any book on the subject, no matter how well-written. Kakalios does not always succeed in the later chapters, and he often doesn't make enough connections to his superhero examples as he explains a physics concept. I'm willing to cut him slack, however, because this is a survey book. For those interested in more depth, there's a lengthy list of recommended reading in the back.

Still, I learned plenty. Certainly I won't forget what Kakalios taught me about the relationship between mass, density, and volume, thanks to the Atom, Ant-Man, and Mr. Fantastic. Density is mass divided by volume, and if you want to shrink yourself or grow larger, you're best to increase your mass and hold your density constant. On a related note, perhaps Kakalios' most impressive feat is one he accomplishes at the beginning of the book. First he calculates how much force Golden Age Superman's legs must provide to allow him to jump 1/8th of a mile in the air. From this, Kakalios deduces the acceleration due to gravity on Krypton and concludes that Krypton likely had matter from a neutron star in its core—hence why the planet exploded! Kakalios' love for his topics, both physics and comics, is obvious in the writing.

I should also mention that I went to see Professor Kakalios when he gave a talk at Lakehead University (when I subsequently bought this book). If you have a chance to attend a talk, do so. You can also see some videos on the book's website. Certain examples, and much of Kakalios' humour, are better experienced in lecture instead of literary form. Nevertheless, The Physics of Superheroes joins Bill Nye the Science Guy and The Magic School Bus in teaching science as it is meant to be taught: with levity. 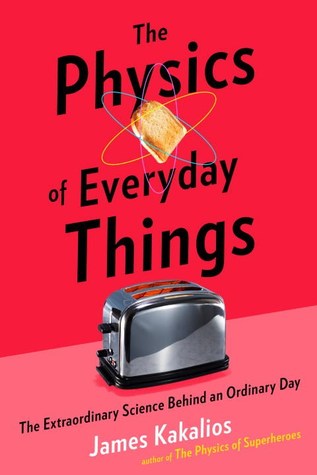