This book crossed my radar and I was ambivalent. On one hand, the description didn’t do a lot for me: it read like your fairly standard fantasy novel with the twist that the society is matriarchal rather than the mostly patriarchal ones we see. On the other hand, I was feeling some epic fantasy, and I wanted to see if Scorpica might pleasantly surprise me. You might say I am an optimist. Well, G.R. Macallister’s story has some intriguing parts to it, and her characters definitely very dynamic. Overall, though, the writing, characterization, and a lot of the worldbuilding choices just didn’t work for me.

Thanks to Saga Press and NetGalley for the eARC.

There are five queendoms: Paxim, Bastion, Sestia, Arca, and the eponymous Scorpica. Each queendom is known for certain traits and jobs; the Scorpicans are warriors. Each queendom is also matriarchal: there are matriclans, each one is ruled by a queen, and men in general have a lower standing in all five societies—for example, in Scorpica, only women can be warriors, and indeed, the nation actually sells their boy children to other kingdoms for a profit. Ok….

I’m rather torn by Macallister’s depiction of a matriarchy here. Look, I get that it is important to show that women in positions of power can be just as awful as men—and that’s what’s on display here. The gender swap in this story is basically, “what if women were in charge and were just as awful and oppressive as men are in our world?” That doesn’t interest me, though—the whole deal with patriarchy is that it is a form of structural oppression that exists beyond any individual person; if you gender swap it into an oppressive matriarchy, you’re not making any specific comment on our society beyond maybe that power corrupts. I am far more interested in depictions of matriarchy that push the boundaries of our understanding of power, etc. And we have those in fantasy already—fantasy has arguably long had traditions of strong female characters, warriors or otherwise, breaking the mould of what it means to be a hero. Scorpica feels very disconnected from those traditions, however, very much like it thinks it is different and edgy and cool when in reality it’s a couple of decades too late.

Similarly, the whole idea of nations that are so incredibly specialized just feels tapped out. We’ve done this before, over and over, and sometimes it leads down interesting avenues but it doesn’t seem to in this case. Even the title of the book is questionable given that a great deal of the action takes place in Paxim and Arca, and four or five of the main POV characters are Arcans. Beyond that, however, lies the main problem with this world: it’s boring.

The cookiecutter nations are actually a symptom of a larger problem, which is a lack of depth to the entire world. This is evident in the way that Macallister has structured the story: every five years, the queens meet to perform ritual child sacrifices to the gods. In between, we get precious few details about what these queens do or indeed what’s going on in any of these nations. When we are with Jehenit and Eminel and the Rovers, we’re told they are travelling bandits in the otherwise generic land of Paxim. Tamura and her warriors train and fight and hunt and fuck, I guess. We’re told Arca is a nation of magic, that pretty much every woman has some kind of categorized gift—but we never really see what this means, never really understand what kind of culture this has created among the Arcans, aside from the small glimpse we get into Mirriam’s bloodthirsty games of palace intrigue.

And then we come to the main plot: the Drought of Girls. The book starts with the last girl being born in a long time. Over a decade passes, and various nations start to get desperate, Scorpica most of all. I will give Macallister this: it’s a great setup to sow conflict among five peaceful countries, to be sure. Deprive them of a valuable resource, set them at each other’s throats. It’s not a bad plan by the Big Bad (and she would have gotten away with it too if it weren’t for those kids…). Again, though, despite the vast number of perspectives and the epic timescale of the novel, we see precious few examples of how the Drought affects day-to-day life in the queendoms aside from the existential worries it creates for some of the queens.

Plus, of course, as a trans woman, this kind of gender-essentialist plotting and worldbuilding always makes me uncomfortable. To be fair, Macallister does explicitly signal the existence of genderqueer people in this world—there is an agender priest who uses they/them pronouns, and at one point the book acknowledges that some people are “neither man nor woman.” Nevertheless, that is pretty much “the bar is on the floor” kind of territory these days; acknowledgement doesn’t do much to fix the larger issue, which is that for the purposes of the story you’ve created, it’s just more convenient if we largely ignore and erase trans, non-binary, and genderqueer people. I can’t get behind that. If your story relies on us existing only in the margins, you are actively marginalizing us, and you should find a better story.

My final critique is just that the writing itself didn’t work for me. This book is so heavily weighted towards tell over show. The omniscient narrator spends a lot of time explaining this world to us, instead of stepping back and letting the characters do so through dialogue and action. I suspect that’s what makes my observation earlier about the shallowness of the worldbuilding all the more poignant for me: it didn’t have to be that way. The writing style practically begs for a much deeper world to explain to the reader. Instead, it remains all surface-level stuff, and the dialogue between characters is … lacklustre at best.

Now if you have read up until this point, you might think I hated Scorpica. Understandable. Truthfully, though, all these complaints aside … I still kind of liked it? There’s charm to it and a strange kind of appeal to the journeys of some of these characters. Macallister has some kind of interesting story here; it’s just never fully realized. Queen Mirriam of Arca, for example, has a fantastic journey that sees her verging into straight villain territory—yet it is squandered in a confrontation with the main antagonist, who herself feels defeated too easily at the climax of the book.

I guess my verdict, then, is that Scorpica is kind of a hot mess of epic fantasy—but I respect that, because as I have said in the past, I prefer big swings and misses over books that don’t swing at all. I think there are a lot of problematic elements here, from the uncritical replication of oppressive power structures in a gender-swapped world to the erasure of trans people to the casual way children are sacrificed and sexualized (there’s a scene late in the novel where a girl who is maybe sixteen or seventeen years old has sex with a woman in her twenties—the timelines and ages of people are a little hard to follow, but it’s the kind of thing where if you start to think about it too much you’re like … oh). For these reasons, I find it difficult to recommend this book. At the same time, I can see what others might see in it. It was a pleasant diversion for a couple of days—but it didn’t get me excited, and in some ways, it left me cold. 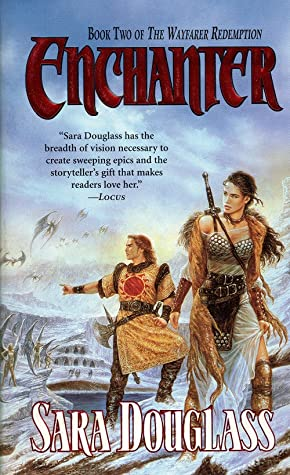