It has been almost exactly two years since I gave Zenn Scarlett a rather mediocre review. In fact, I almost didn’t bother reading Under Nameless Stars. I’m glad I gave it a chance though! Although I don’t remember much about the first book, this sequel feels punchier, faster-paced, and more interesting than that one.

Zenn has stowed away aboard a passenger liner bound for another star system. She thinks her dad is on board, or at least, an alien who kidnapped her dad is on board. Joining her are her rikkaset Katie and her “friend” (frenemy?) Liam. Zenn soon picks up some other allies, notably a dolphin in a walking suit named Jules Vancouver. Along the way, they discover that the mystery of the vanishing Indra is directly related to the disappearance of Zenn’s father, and they are all in much, much more danger than they could have imagined.

The higher stakes here definitely helped improve my opinion of Christian Schoon’s writing. Almost from the beginning, Zenn is so far out of her depth it isn’t even funny—but she makes just enough of an ally, with just the right amount of honesty, to pull things off just long enough. Schoon might stretch disbelief, but only a little. Zenn’s deception doesn’t survive long, but it doesn’t have to—because by that point, the rest of the plot has been blown wide open. Basically, Schoon never keeps the situation the same long enough for me to get bored, and I appreciate that.

I also enjoyed the creativity demonstrated in the various ways that alien life-forms are imagined not just as existing but as playing integral roles in spaceflight. From the faster-than-light–enabling Indra to smaller species used as guards or surveillance, Schoon’s vision of a sci-fi future is far more organic and diverse than your typical space opera, which usually falls into a hard, nanotech-driven, heavy metal vision of the future. Given that this book seems to be aimed at the younger end of the young adult audience, this creativity and imagination is really something I want to applaud.

Unfortunately, Under Nameless Stars doesn’t quite make me go, “Ooooooh.” As much as I enjoyed it, and as cool as the creatures are, this book shares with it some of the critiques I gave Zenn Scarlett. Namely, Schoon might think big in his worldbuilding, but the depths of his plots and even some of his characters could use more work. The entire Indra conspiracy is fairly obvious in its orchestration, and the whole resolution is somewhat uninteresting. After making the stakes so high they are literally astronomical in scope, Schoon doesn’t quite deliver the pay-off I’d like. And even the set-up is somewhat washed out by the focus on avoiding capture from the enemy that only gets introduced midway through the book.

Basically, Under Nameless Stars is a step up from the first book. Everything has improved for sure. We still have a ways to go before I’m ready to shout about Schoon though. The writing is “more than OK” but needs a little something extra. It’s a shame Strange Chemistry folded, because it’s the kind of imprint that is perfect for new writers who already have what it takes to write good novels but still have some growing to do. 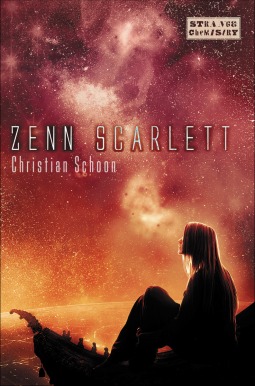