There’s nothing quite like a good Agatha Christie novel, hmm? I find reading one of her mysteries so comforting. It’s like the perfect intellectual beach read: you know what to expect, yet there are still surprises (even if you manage to guess whodunit, which I seldom do). The Hercule Poirot novels in particular must be among my favourites. Mystery was my first genre love, even way back before I got into science fiction and fantasy, and in mystery, Christie made history. The Murder of Roger Ackroyd, sensational and controversial and regarded by so many as her best work, definitely attests to her skill as a writer.

We start, as we often do, in a quaint English country village. This is set sometime after Poirot has retired “to grow the marrows.” But just when you think you’re out, they pull you back in! Poirot finds himself neck-deep in the murder of the eponymous Ackroyd, with a whole household of suspects. In the place of the faithful Captain Hastings we have a Watsonian Dr. Sheppard, who not only narrates the book and assists Poirot but also found the body.

For the first part of the novel, Poirot figures very little. We learn about Sheppard’s practice and life, how he attended to Mrs. Ferrars after she died, and we see him meet with Roger Ackroyd. During this time Christie lays the groundwork, scattering clues—or clews as they are spelt here—that will be significant much later in the story. Poirot is just a batty old “Frenchman” who has taken the cottage next door and who is so opaque that not even Caroline, Sheppard’s sister and the town gossip, can divine his identity.

That all changes, of course. But I love the idea that Poirot wants out of the limelight in his retirement—just as I find it eminently believable that he wouldn’t be able to resist the thrill of the mystery. Although there is a little bit of the, “Oh, poor M. Poirot is past his prime and really should go back to growing marrows,” in general the other characters treat Poirot with a little bit of veneration. He is known, here.

Of course, it’s the identity of the killer that ultimately resulted in this novel receiving so much acclaim (and controversy). Christie was the first to employ “the narrator did it!” I find her use of an unreliable narrator itself enjoyable, regardless of the fact he also happened to be a murderer. I like to think that in any of the books narrated by Hastings, part of the reason I don’t solve the crime is because I’m forced to “wear a Hastings cap” and see everything through his eyes. Here, the narrator isn’t just omitting or garbling information that Poirot readily receives first hand: he is actively deceiving both Poirot and the reader.

I want to take a moment to emphasize what a technical feat this is. Separated from this book by just shy of ninety years, and exposed to countless derivative plot devices since then, it’s tempting for a modern reader to shrug their shoulders and go, “Meh,” when they read those final chapters. Even if you aren’t impressed by Sheppard’s guilt (if, indeed, he is guilty—we have only his word to go on here, and he has already lied to us!), just think about what Christie had to do to write this book.

I like think of murder mysteries as n-dimensional objects. The writer of a mystery necessarily must perceive it from a different perspective than the reader: the writer knows, from the beginning, who did it and why. All the pieces are apparent to them, whereas the reader only discovers this as a function of time. But that’s not all a writer does. She has to rotate this mystery and perceive it from other angles. She has to consider how it looks to the detective—how does Poirot fit all the pieces together to get to the solution? Then she has to consider how the mystery looks to the narrator (and thus, usually, to the reader) at a given point in time.

In other words, writing mysteries be complex, yo.

The Murder of Roger Ackroyd stands out because Christie took it a step further, having to consider how the mystery looks to the narrator and then how the narrator makes things look to the reader. That must have required a lot more thought and planning. So my hat off to her.

I’ll also just add that I love how as these novels age they become intricate studies in the attitudes of the day. Christie’s characters have so much unexamined class privilege. I just find it so fascinating that our ideas of class have changed so much with time. Back then, to be considered reasonably well-off, you had to have some servants. Even Sheppard and his sister, who live alone in a little house, have a servant! Servants are a curious fixture in Christie novels, because they tend to be invisible and nameless (think of the Breton-capped woman who waits on Poirot in the Larches) unless they are relevant to the mystery, in which case they are naturally suspect.

So I wonder if we’re reaching a point where Christie’s novels are beginning to go the way of the Regency romances. That is, the writer assumes cultural knowledge the reader no longer has, so that which is left unsaid, or implied, is almost entirely lost on us. Just as modern readers have a hard time really comprehending the world of Jane Austen without some historical grounding first, I suspect that most of us don’t have as full an understanding of the world Christie depicts here either. Unlike Shakespeare, where this problem has a great deal to do with language drift, this is almost entirely a function of cultural assumptions.

While I lack some of the understanding to completely immerse myself in her world, however, I still fully enjoy these novels. The Murder of Roger Ackroyd is no exception. It is every bit as clever and charming and compelling as you might be led to believe. 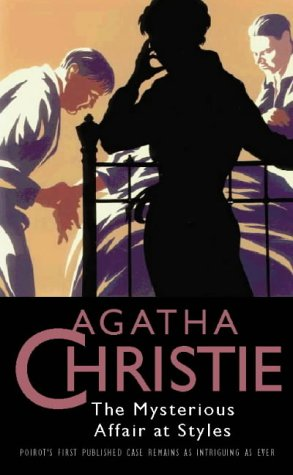