It's very rare that I wish I had started a series with the second book instead of the first, but that's what I wish about Jay Lake's Clockworth Earth trilogy. I had some serious reservations about Mainspring. Its sequel, Escapement, might be an interesting example of how to avoid the dreaded "middle book syndrome" that afflicts so many trilogies. Categorically superior, Escapement is the maturation of the fantastic premise Lake began in Mainspring, without the insufferable protagonist and his vague, fuzzy quest from God.

Whereas the narrator of Mainspring followed only Hethor, Escapement follows three characters. Two of them were minor characters in the first book: Emily Childress, the librarian who initially aids Hethor; and Angus al-Wazir, chief petty officer about the ill-fated Bassett. The third, our protagonist, is Paolina Barthes, a young woman of Portuguese descent who has spent her entire life in Praia Nova, a settlement along the Wall populated by the descendents of shipwrecked and outcast sailors. Paolina is provincial in the sense that she knows very little about the outside world. When she builds a unique piece of clockwork that allows her to manipulate reality itself, she sets off in search for England and its "wizards." Suffice it say, she's sorely disappointed.

I like Lake's decision to shift to three perspectives. All three characters are much more interesting than Hethor. Paolina at least seems to have a well-developed sense of the moral implications of what she's doing, and she sets out with a very specific goal in mind. This is preferable to Hethor's, "Well, I guess I'll find the Key Perilous. Or maybe I won't" method of operation. I also got a palpable sense of Paolina's frustration with the misogynistic world order embodied by Praia Nova's fidalgos. Despite Hethor's class-based oppression in the first book, I couldn't sympathize with his hardship, probably because of the golden tablets that kept falling from the sky whenever he needed reassurance. Aside from a brief cameo by an angel at the end of the book, Paolina's experiences notably lack a religious dimension.

This is true of Escapement as a whole, and that pleases me. The central conflict is temporal: Childress finds herself the unexpected representative of one secret society, the avebianco or "white birds," sent as ambassador/sacrificial lamb to the alliance between another secret society, the Silent Order, and the Chinese. These two are collaborating to construct a metaphorical bridge over the Wall. Meanwhile, England has dispatched a team to bore a tunnel through the Wall; Al-Wazir is attached as resident Wall expert and general safety officer.

There is a spiritual component to the conflict. Childress opposes the Golden Bridge project because she recognizes that it will destroy the balance between the two halves of the Earth. Such a bridge would allow the two powerful empires in the Northern Earth to spill into the South, which is still a land of untamed magic. Similarly, Paolina is frightened of her newfound power, especially once she sees what is possible when it falls into the hands of the Silent Order. However, the spiritual component is just that: it's a part of something larger. Mainspring, in which the fate of the world literally depended upon Hethor succeeding, failed because Lake concentrated too much on the big picture. He didn't spend enough time establishing details that would make me care about saving this world. Escapement gives us a much broader look at the politics and philosophies present on this clockwork Earth, which makes the story much richer, and thus better.

We only run into problems again toward the end of the story. While Paolina has more specific goals than Hethor, her disappointment and disillusionment with England and the wider world in general strikes a blow to those goals. She wanders somewhat aimlessly afterward, and as a result, the book itself loses its sense of direction. Perhaps it's true that Paolina's confusion is a realistic and natural response to her experiences. That's all well and good. But fiction can't always be realistic, and Escapement does not sustain the level of drama necessary to keep me engaged throughout the final chapters. There are some more airship battles and some magical translocation and character drama as Paolina tries to decide how to deal with her power. Unfortunately, Lake does not synthesize these disparate dramatic elements into a single, unified plot.

I'm in the strange position of having finished Pinion today, prior to writing this review. So I know how the series ends, and I've already started forming my opinion of it overall—but I don't want to spoil my next review! Escapement is definitely better than Mainspring, and in some ways it made me think I judged the latter too harshly, because I don't see much of a difference in the quality of the writing. My subjective tastes aside, I think it also demonstrates how choices in the scope of a plot and the perspective of the narrator can affect the reader's experience. Mainspring had high stakes but was confined to a narrow perspective that I just didn't like, so I had a hard time liking the book. Escapement branches out a bit even as it tamps down the ambition, resulting in a much more balanced read.

On its own, comparisons cast away for now, Escapement has a strong theme about relationship between self and the orderly world, whether that world is the spiritual or the temporal. Paolina rebels against the world order as she perceives it. She rebels against the men in power, and against her own role as a woman. She does so vehemently:

"If I may ask, why do you travel as a girl? Slim as you are, you could wear trousers and pass for a young man. People would devil you much less if you did so."

"I…" It wasn't as if Paolina didn't understand that to be a possibility. "Men are … men. The venom in the voice surprised her. "I don't want to be one, even for a moment."

(Ellipses and the horrible double negative are both Lake's.) Paolina is staunch and uncompromising in her principles. She abhors when her power results in death and refuses to be kill anyone else to save herself. This is something I admire, and it's this type of convicted characterization that makes Paolina a much better protagonist than Hethor (oh, there I go with the comparison again).

Childress and al-Wazir both experience their own small rebellions. The former assumes the identity of a dead Mask, becoming herself as a Mask, which is a very interesting look at the whole idea of the performance of self. The latter uncomfortably assumes a role in a government-sponsored expedition to the Wall. A petty officer at heart, al-Wazir isn't really sure what to do with himself, so it's not surprising when he finds himself helping the Brass man Boaz instead of pursuing his duty to Dr. Ottweil. In both cases, these characters find themselves making choices to deviate from their previous sensibilities about how the world should be. Watching the consequences unfold from there makes Escapement a fair bit entertaining.

While far from even espying perfection on a clear day, Escapement merits praise and a grudging amount of steampunk love (which is like regular love, only coal-fired and administered by a system of pulleys and gears). So here's something I don't often recommend: don't read the first book. Skip to this one. It's better, and on its own it's even good. 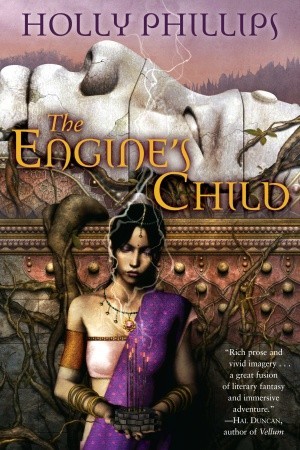