There is both reward and danger in reading the books of a series in close succession. Obviously, it’s easier to see the common threads that tie the books together; it’s easier to appreciate the arc of the characters and how events in one book might later affect events in another. I often deepened my appreciation for many series through an extensive re-read (and the same could be said for “marathoning” television shows). Nonetheless, there always exists the problem of burnout, and the temptation to relentlessly compare one book in the series to another. I face the latter problem with Naamah’s Curse. I cannot resist trying to compare it to Naamah’s Kiss.

So rather than tiptoe around this elephant for the entire review, I’m tackling it head-on in a showdown: Naamah’s Kiss versus Naamah’s Curse.

This book picks up immediately where Naamah’s Kiss ends. Having, with Master Lo Feng’s help, resurrected Bao but at the cost of splitting her diadh-anam, Moirin sets off across Ch’in and into the wild Tatar steppes in pursuit of her lover, who himself is seeking answers and solitude. (Yes, she promises to give him space, but apparently that doesn’t extend to an entire country’s worth of space. So she chases after him, because that will make him love her more!)

Moirin falls in with some Tatars, has some good times, and finds Bao. But because this book would suck if it ended on page 100 with a happily-ever-after, Carey engineers a complication: the Great Khan sells Moirin to a fanatical Yeshuite (Christian) who believes it’s his destiny to “save” her by listening to her confess all the dirty sexual acts she’s performed. Hmm.

The first act of Naamah’s Curse cannot hold a candle to Naamah’s Kiss. Carey is at the height of her skill as a writer when she introduces Moirin and speeds through her childhood and adolescence. Moirin grows from a wiry wild thing to a young woman burgeoning with passion and desire. Here, we spend a lot of time listening to the Patriarch of Riva complain about how passion and desire are distractions from serving the One God. Although I liked the reminder that few cultures are as permissive about sex as Terre d’Ange, I found Carey’s portrayal of the Patriarch rather one-dimensional and boring at best. Fanatical though he might be, the idea that he has been spying on Moirin and amassed such a thorough chronicle of her adventures, just because he thinks she is the one being that is the most challenging for him to redeem, doesn’t seem very believable to me.

Notably, there’s much less sex in this book than in the first one. I don’t think Moirin actually has sex until she reunites with Bao, about a hundred pages in. And though the frequency picks up towards the ending, it is never depicted with quite the same relish or detail that features in Naamah’s Kiss. Moirin is no longer the sexual innocent that she was in the first book; indeed, she likens herself to Jehanne as she teaches the Rani a few tricks. It seems that if the first book was Moirin learning to accept and come to terms with her remarkable depth of desire, this book is about Moirin mastering that desire until she can use it for her own ends. This lesson comes full circle when Moirin is confronted with the possibility of seizing the Kamadeva diamond for herself. The diamond’s ability to amplify the desires of anyone who lays eyes upon it would overclock Moirin’s natural attractiveness, turning her into some kind of weird lust goddess. It would not be good times.

Still, I’m going to have to give it to Naamah’s Kiss here. As much as I enjoyed Moirin master her desires here, this book lacks any guiding characters as fun as Jehanne and Raphael. In fact, this book lacks a strong central antagonist. I cited that complaint about the previous book as well, but it wasn’t as much of a problem. Unfortunately, Carey has yet to create a nemesis for Moirin as deliciously twisted as Melisande was for Phèdre. Much like Lord Jiyang from the first book, the Falconer and Spider Queen are pale, stock villains with very little that makes them interesting.

Moirin’s destiny, as indicated by the flickering of her diadh-anam, continues to figure prominently in the plot. She refers to it constantly. Again, I’m not a fan of this. It’s not so much lazy writing as boring writing. Allowing a character the certainty that her actions are “correct” through some objective external instrument removes the ambiguity that should accompany all moral decisions. Carey seems to recognize this problem, because near the climax of the novel she attempts to introduce that ambiguity: Moirin’s diadh-anam refuses to indicate whether killing a man in cold blood while concealed in her magical twilight would be too dishonourable to bear. But it’s a false uncertainty.

Which brings me to the main problem with Naamah’s Curse: Moirin doesn’t suck enough.

Seriously, she faces an amazing number of challenges in this book, and she overcomes them all pretty easily. For example, she eventually begins to go along with the Patriarch in order to lull him into a false sense of security. He gets as far as wanting to baptize her, but he asks her to swear her faith on her diadh-anam. She can’t swear falsely without giving up that spark inside herself, so she refuses. And there’s no drama about the refusal, because we know she can’t do it. Fortunately, the Patriarch’s half-D’Angeline son gets seduced by her hair, so it’s all good.

Moirin’s beauty in Naamah’s Kiss was her vulnerability to external influences. Jehanne and Raphael both wanted something from her. Raphael started using her magic, twisting it for the ends of his Circle, nearly killing her on at least one occasion. This conflict strengthened Moirin and forced her develop into a much more confident person capable of taking action independent of what she thinks her destiny desires from her. In Naamah’s Curse, we see little of that. We see a Moirin on auto-pilot, one who is content to sit back and let things happen. Worse, we see a Moirin who seldom seems tempted, who possesses a certitude so solid as to make her an uninteresting protagonist.

I think at one point she even complains, in what comes as close to breaking the fourth wall as we’ll ever get, that being a heroine is so hard. What did you expect, Moirin? You had the opportunity to stick around Terre d’Ange as a royal companion. You chose the harder path.

Moirin is not a bad character per se. She just lacks for much in the way of challenges in this book, and as a result, her character doesn’t change as swiftly as it did in Naamah’s Kiss. It does change a little, and I like seeing those changes. But if conflict in a book is a river, this is a burbling brook and the first book was raging rapids.

All signs point to the New World (sorry, Terra Nova) for Moirin and a final confrontation with Raphael. (I haven’t yet read the back cover of Naamah’s Blessing as I write this.) I can only hope that she faces the toughest challenges of her life, so she can emerge from them even stronger and take her rightful place alongside Phèdre and Imriel as compelling characters in Carey’s canon. 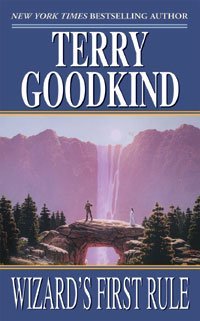