The Alien represents the end of the First Age of Animorphs. It is Ax’s first time as narrator, and so with this book, all of the six Animorphs have had a chance to tell their story. As with the introductions to each of the human Animorphs, this book lets us hear in Ax’s own words why he is fighting the Yeerks. Thanks to his knowledge as an Andalite, he also allows Applegate to share more background about the Andalite–Yeerk war. The human Animorphs begin to break down the last of Ax’s barriers, so he can finally become one of them. We and they now have more context, and going forward, this is going to be a whole new war.

Because, thanks to Ax’s brief contact with the homeworld, we know that the humans are on their own for now. The Andalites don’t consider Earth a priority. So it will be up to the Animorphs to do their best to hold the fort until the Andalites get around to sending a fleet. Once again Ax manages to come so close to killing Visser Three, only to be foiled at the last moment by something resembling morality. Pah! If Ayn Rand were writing this, it would be all:

<My name is Alloran-semitur-Corrass, and you must kill me, young aristh.> The Randalite and former host of Visser Three, body weakened by the venom as his mind was obviously weakened by a lack of will that allowed the Yeerk to take it over, could not stand on his own. He was weak, and therefore he was useless.

<Yes.> I had nothing but contempt for the older Randalite before me. <For you stand in the way of my obtaining what I truly desire. You cannot help me, and so I have no reason to help you.>

My tail twitched and severed Alloran’s head from his pathetic body. I had briefly wondered what I would feel when I killed one of my own people. Then I realized that was irrelevant. Sentiment had little place when considering how one could best achieve one’s goals. Alloran was weak. I am strong.

Later, Cassie would approach me to discuss these ideas. Of all the humans, she is the one least suitable to living in the perfect society these humans will achieve if they prove strong enough to throw off the shackles of the Yeerk oppressors. Prince Jake has it within him to be a great leader of men, if he can only actualize his self-worth. Rachel understands the need to take what is not offered. Even Marco, beneath his callous veneer of humour, is aware that the objective nature of reality around us means that one must always accept what happens and act accordingly, rather than rejecting events and living in a fantasy of the past.

Cassie said, “You must be sad you had to kill Alloran. He was once a proud warrior of your people, was he not?”

<He was a war-prince. But he lacked the strength and core moral character to succeed.>

“Did no one try to help him when he was taken by the Yeerks?” Cassie and her father run a primitive medical facility where they treat injured members of lesser species on Earth. Her father does not even charge the fair market value for this service! Sometimes, I wonder if Randalites and humans will ever truly be able to co-exist. Despite the greatness of a few individual thinkers in this species, many of them are weak and clamour for hand-outs and “support systems.” It boggles the mind, that an entire species could be so lazy.

<To help another person is to make them weak!> My tail quivered in anger, and a thing rose in me. How could Cassie not see that? Had she already been corrupted by the vile collectivist Yeerk philosophy? I steadied myself, then launched into a six-hour lecture on the nature of individualism and its triumph over collectivism—the benefit of thought-speak, obviously, being that I would not have to pause for breath, and Cassie would be unable to ignore my words of wisdom.

OK, maybe I was channelling Terry Goodkind towards the end there….

Still, my point stands. Ax shows Alloran mercy. Acts of mercy are important moments in Animorphs, because this is a series about war and the effects of war on what, we must remember, are essentially conscript child soldiers. An Andalite warrior, rather than an aristh, might indeed have cut Alloran down to rid the world of the threat of a Visser Three with morphing powers. Ax’s time among humanity must have corrupted him.

And he takes responsibility for Elfangor’s indiscretion. I vaguely remembered this, but it was so chilling to see it happen again. This is the first time Applegate really shows us the level of Grade A Quality Douchebag that the Andalites, like any fictional advanced alien species, tends to be.

Of course, the main attraction of Ax as the narrator is his status as the outsider—not to mention being an alien. In addition to dropping tidbits—or outright sharing information with the reader—he is just hilarious. For example, take this from one of the diary epigrams at the beginning of a chapter:

Books are an amazing human invention. They allow instant access to information simply by turning pieces of paper. They are much faster to use than computers. Surprisingly, humans invented books before computers. They do many things backward.

Oh, those silly humans. Always doing stuff backwards! I have no doubt Applegate includes this as a bit of a shout-out to her devoted fanbase of loyal young readers. Books are amazing. More than that, however, this quote is just one in a long line of examples where Ax expresses his appreciation for human things we consider mundane. Chocolate. Cinnamon buns. Chili. OK, most of it is food. Our technology—excepting books, I guess—is primitive. Yet throughout The Alien, Ax remarks how humans are … well, remarkable. How in a century we’ll be out among the stars, hanging out with Andalites.

Prepare yourselves, hoofies. We’re coming for you.

If this is the end of an era, then it is a great ending. We’ve met all of the team now, gotten to know them, their thoughts, their desires. Up until this point there have already been hints at the deeper, more mature game Applegate wants to play. But with the next book, the series begins its inexorable transformation into a darker, much more adult story. The Animorphs now fully understand the existential ramifications of what it is they are doing. But just how far are they willing to go to protect their planet? Who and what will they sacrifice if it means winning?

And is Ax ever going to learn to control his taste buds?

Tune into the next review to find out! 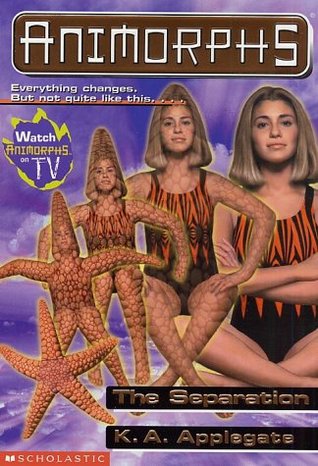